The East Bay Punk Digital Archive (EBP-DA) is a project spearheaded by Stefano Morello and funded by the Digital Initiatives,  Lost & Found, and the New Media Lab at The Graduate Center, CUNY.

Responding to the increasing academic interest in punk and its institutionalization – exemplified by the proliferation of academic publications on the topic and the recent institutional acquisitions of a number of personal collections – the EBP-DA aims to preserve and provide open access to the artistic production of participants in the punk-rock commons that loomed in and around the San Francisco Bay Area between the early 1980s and the mid-1990s. The goal of the EBP-DA is to open up the archive and make its content accessible not only to an audience with the cultural and financial capital to access and travel to the institutional archives, but also to subcultural participants from around the world, and to a general public unfamiliar with the topic. A set of permanent digital exhibitions will guide visitors through the countercultural modes of resistance of the East Bay punk scene of the 1980s by asking them to attune themselves to the dialectics of innovation and annihilation that “make” punk and informed its very posture and cultural production since its early days. This seems particularly true in the San Francisco Bay area and its periphery, where punk grew out of a long-standing tradition of countercultural, social, and vanguard literary movements invested in the exploration of alternative modes of engagement (and disengagement) with society.

The development of the EBP-DA is an integral part of Stefano Morello's dissertation, "Let's Make a Scene! East Bay Punk and Subcultural Worlding." His work looks at and listens to East Bay punk as the overlooked historical realization of a punk ideal, supported by an autonomous cultural apparatus that, through a set of national and transnational underground networks, perpetuated its own mythology in time and space. With its epicenter in the Gilman Street Project – a non-profit, all-ages, collectively organized music venue that opened its doors in Berkeley in 1986 – the East Bay punk scene fostered the inception of subcultural formations that expressed their politics via an aesthetic of silliness and grew out of a generation that bristled at the macho, hetero hardcore scene that punk had become by the mid-1980s. I am particularly interested in the generative function of the literature, an otherwise elusive form of subcultural production that, especially with the advent of mainstream punk, has been relegated to the background. Zines – often manifestos of ordinariness for marginalized subjects — flyers, catalogues, and posters provide, through their poetics of amateurism, a behind-the-scenes outlook on the underground punk networks that developed within and without the United States. The EBP-DA, as a digital companion to my dissertation, will act as a platform that puts in conversation the different clusters of punk and ideologies that converged into and emerged out of the scene. My curatorial efforts will be especially designed to reinterpret punk not only as an aesthetic and a (mostly white and angry) affect, but as a mode of belonging in unbelonging, manifested in a sustainable and self-reliant community of dissensus rooted in territoriality and its own alternative institutions.

This project began in November 2017 – while conducting preliminary ethnographic work for my dissertation, I realized the difficulty in accessing most of the material referenced (and often produced) by the subjects of my research due to both its geographical dislocation and the access barriers to institutional archives especially for non-academics. This prompted me to think about ways to collect the material in a single place, accessible to members of the community that created it, rock ‘n’ roll fans, and researchers alike. This project is also my own contribution to the scene and the concrete manifestation of my concurrence with the argument that has been made against the assimilative thrust of “punk studies” as the latest object of cultural capital. “Punk,” Golnar Nikpour reminds us, is “auto-archiving, self-aware, and interested in its own history [and] operates on the premise that everyone is an expert.” Hence the necessity for collaborative punk scholarship and, as suggested by Patrick Deer, Josè Muñoz, and Tavia Nyong’o, with reference to Fred Moten and Stefano Harney’s The Undercommons, a vision of “study” as a speculative practice that can be with and for people where they are. As punk becomes increasingly institutionalized, I thus position my work at the intersection of scholarly investigation and cultural preservation, emphasizing the importance of collaborative and archival research. 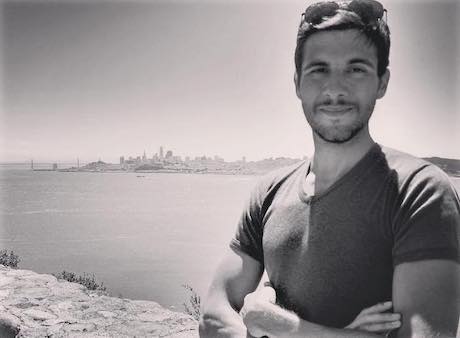 Stefano Morello is a  doctoral candidate in English at The Graduate Center – City University of New York. His academic interests include American Studies, pop culture, poetics, and digital humanities. His dissertation, "Let's Make a Scene! East Bay Punk and Subcultural Worlding," explores the heterotopic space of the East-Bay punk scene, its modes of resistance and (dis-)association, and the clashes between its politics and aesthetics. He serves as co-chair of the Graduate Forum of the Italian Association for American Studies (AISNA) and is a founding editor of its journal, JAm It! (Journal of American Studies in Italy). As a digital humanist, Stefano focuses on archival practices, with a knack for archival pedagogy and public facing initiatives. He co-curated with Kerri Culhane "The Lung Block: A New York City Slum and Its Forgotten Italian Immigrant Community," an exhibition based on his yet unpublished M.A. dissertation.

Many thanks to Patrick Hynes for letting me use his drawing of Spike Anarkie in the website's logo. And many thanks to Spike Anarkie for lending himself to this – we all know how sensitive he can be when it comes to institutions.

All rights to the material in the archive belong to their respective owners, to whom I am grateful for trusting me with the digital preservation of their work.